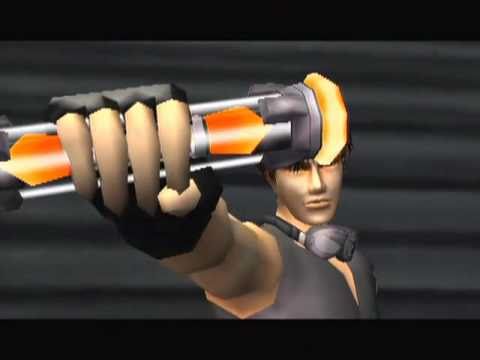 EOE: Eve of Extinction is a relatively early Action/Beat-em-up PS2 game made around the beginning of 2002. Being published by Eidos/Titus and developed by “Yuke’s Future Media Creators”, I really tried to enjoy this game since they also developed “Evil Zone” for Playstation and “Sword of the Berserk: Guts’ Rage” for Dreamcast (among many other games), but I could never get into it. The clunky controls, constant need to change weapons and strategies just to make life or death jumps, and the often annoying as hell camera just ruined what was otherwise an interesting game with a variety of different mechanics.

The story deals with Josh Calloway and his girlfriend, Eliel Evergrand, two Ex-Wisdom employees. Wisdom Company is a rising titan in the field of bio-genetics but also deals in the construction of underground military weapons. They have garnered a lot of attention due to their development of a unique top secret weapon known as “Legacy”, a fusion of ancient metal and the human nervous system and a masterpiece of destructive power. Wisdom, while seeking to monopolize on their discovery, have gone simply from being a provider to having far greater ambitions… world-wide military control.

Josh and Eliel soon discover the sinister intentions of Wisdom and try to escape, but fail. They’re captured and Josh is subjected to painful experiments while Eliel’s nervous system and soul is rewired into the core of the lastest experimental Legacy model – codenamed “EOE”. While heading back for further experimentation, something happens which grants Josh the opportunity to escape with Eliel (Legacy), and now he plots revenge. Combining his exceptional physical strength and reflexes with Legacy’s amazing destructive power, Josh is a one-man army taking revenge on Wisdom for what they did to Eliel and for being crazy lunatics as well.

The game is your basic action game that is interesting due to the variety of mechanics it has. From using special skills to reach different areas to using your elemental Legacy powers to solve puzzles to pressing buttons during action sequences, the game is a combination of several other games such as Dynamite Cop / Deka, Sword of the Berserk: Gut’s Rage, Soul Reaver, etc. Fighting is done in a fairly clunky fashion where you have a light, fierce, and legacy function. You can also switch weapons during combos to do a Weapon Switch Combo, as well as unleash powerful “Legacy Drives”. The game has a variety of weapons that can be used and leveled up, which presents the player with a number of different combos and skills needed to progress through the game.

While this is initially good for the most part, the game is pretty drab and annoying in its entirety, which is unfortunate as it does possess some good ideas. The fighting is pretty deep for a brawler once you gain access to most of the game’s ten different weapons and there are a few unlockables, but the game probably won’t hold your interest long enough to get that far in the game and for a while, you’ll spend more time figuring out how to go up and down areas without accidentally killing yourself than engaging in cool brawls.

This is a video of the game in action. Enjoy.

Biko for the PC